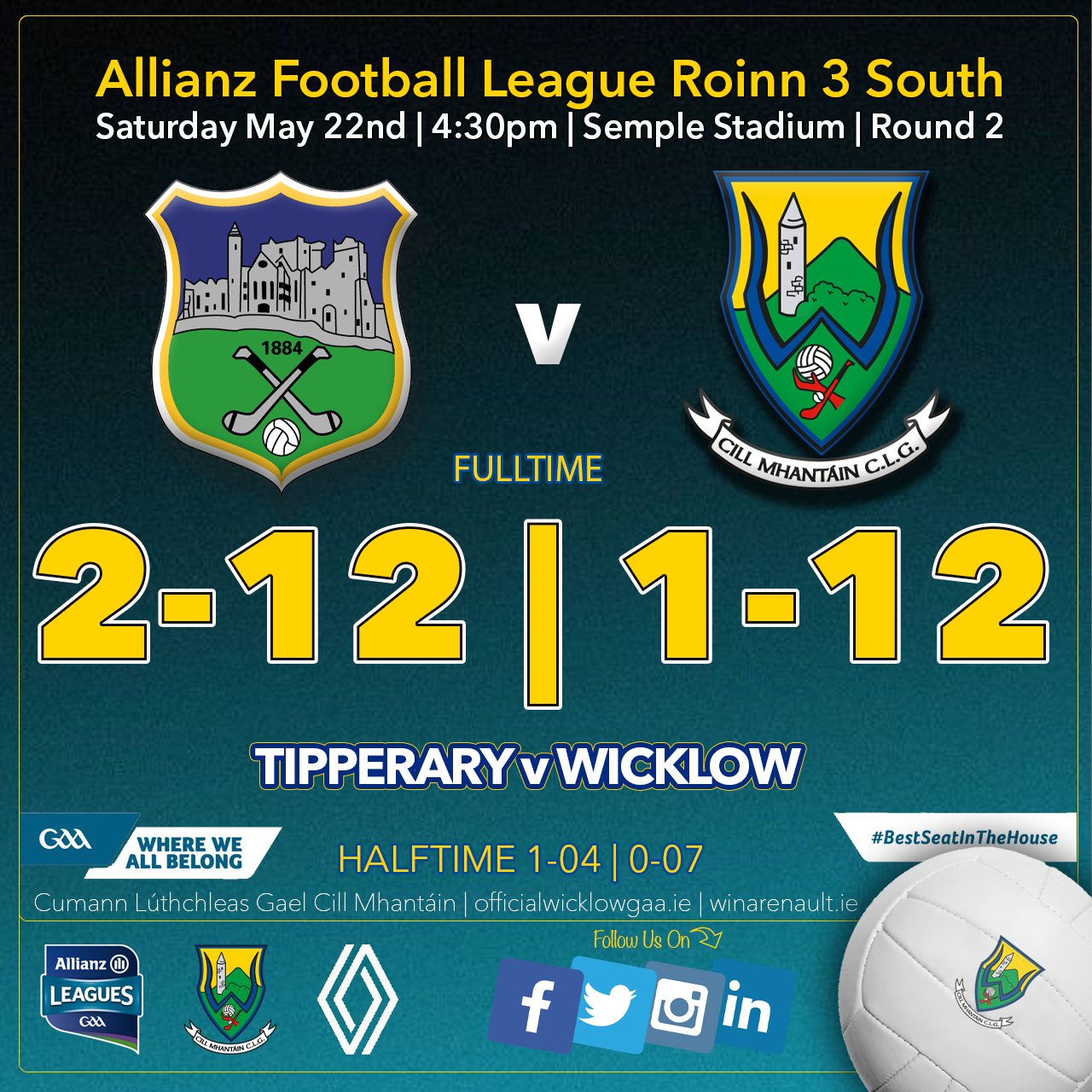 Wicklow put up a spirited performance but ultimately came up short in their battle with Munster Champions Tipperary in their Division 3 game in Thurles on Saturday.

Wicklow, who made 3 late changes to the starting fifteen started the brighter with Dean Healy sending a high ball in to Seanie Furlong who fielded and fisted over the opening score inside the opening minute.

In the 5th minute JP Hurley was shown a black card for pulling down his opponent near the halfway line. Frees from Sean O’Connor and a point from play from Steven O’Brien helped Tipperary open up 0-4 to 0-1 lead after 10 minutes.

Wicklow soon found their stride and were very unfortunate not to have had the games first goal only for goalkeeper Michael O’Reilly to pull off a good double save to deny Conor Byrne. However points from Andy Maher, Eoin Darcy and Podge O’Toole had Wicklow level at the Water Break.

Tipperary started the 2nd quarter well and Conor Sweeney nearly took full advantage of a long ball into the square only to see his fisted effort deflect wide of Mark Jacksons goal. Straight from the kickout Darcy nipped in off the right and fisted a lovely score to put Wicklow back into the lead 0-5 to 0-4.

Soon after Maher was forced from the field to be replaced by Kevin Quinn who set up Niall Donnelly from the resulting restart to knock over another score.

On the half hour Tipperary struck for their first goal. A well worked team move which resulted in Conor Sweeney stroking the ball under Jackson into the net. Jackson helped repair some of the damage by converting a wonderful free from near the “65” for the final score of the half, sending the teams in level 1-4 to 0-7.

The second half started off slowly with only 4 points in the opening fifteen minutes, two Tipperary frees with Jackson and Furlong replying for Wicklow.

Tipperary then struck for their 2nd goal in the 52nd minute when a handpass by Nicky Devereux went astray and debutant Shane Ryan received a pass from Sweeney to finish low into the net and put his side up by 3 for the first time since early in the opening period 2-6 to 0-9. This was soon extended to 4 with a nicely taken score from wide on the right and brought up the Water Break.

Wicklow kept in the game with attacking runs especially from Quinn who won a free that was tapped over by Murtagh to help reduce the margin to three with a 16 minutes to go. Wicklow then had a great chance of a goal only for Quinn to blaze wide after great build up.

Tipperary kept the scoreboard ticking over with points from the likes of Sweeney and O’Connor but with 6 minutes left Wicklow were thrown a lifeline when Tipperary defender Emmet Moloney was shown a second yellow card for a dangerous tackle.

Wicklow struggled to take advantage and another score from Steven O’Brien extended Tipperary’s lead 2-11 to 0-11.

With time running out Mark Kenny knocked over a point from a difficult angle and when Jackson knocked over his 3rd free the lead was all of a sudden down to 4 with six minutes of additional time given.

Tipperary showed their experience but Davy Burkes side never gave up and Kevin Quinn won a penalty in the dying moments that was eventually given by referee Seamus Mulvihill after talking to all his officials. The penalty was coolly slotted by Furlong to reduce the deficit. Unfortunately for Wicklow the final whistle blew immediately after.

Wicklow now host Limerick next Saturday in a must win encounter to have a chance of staying in Division 3.