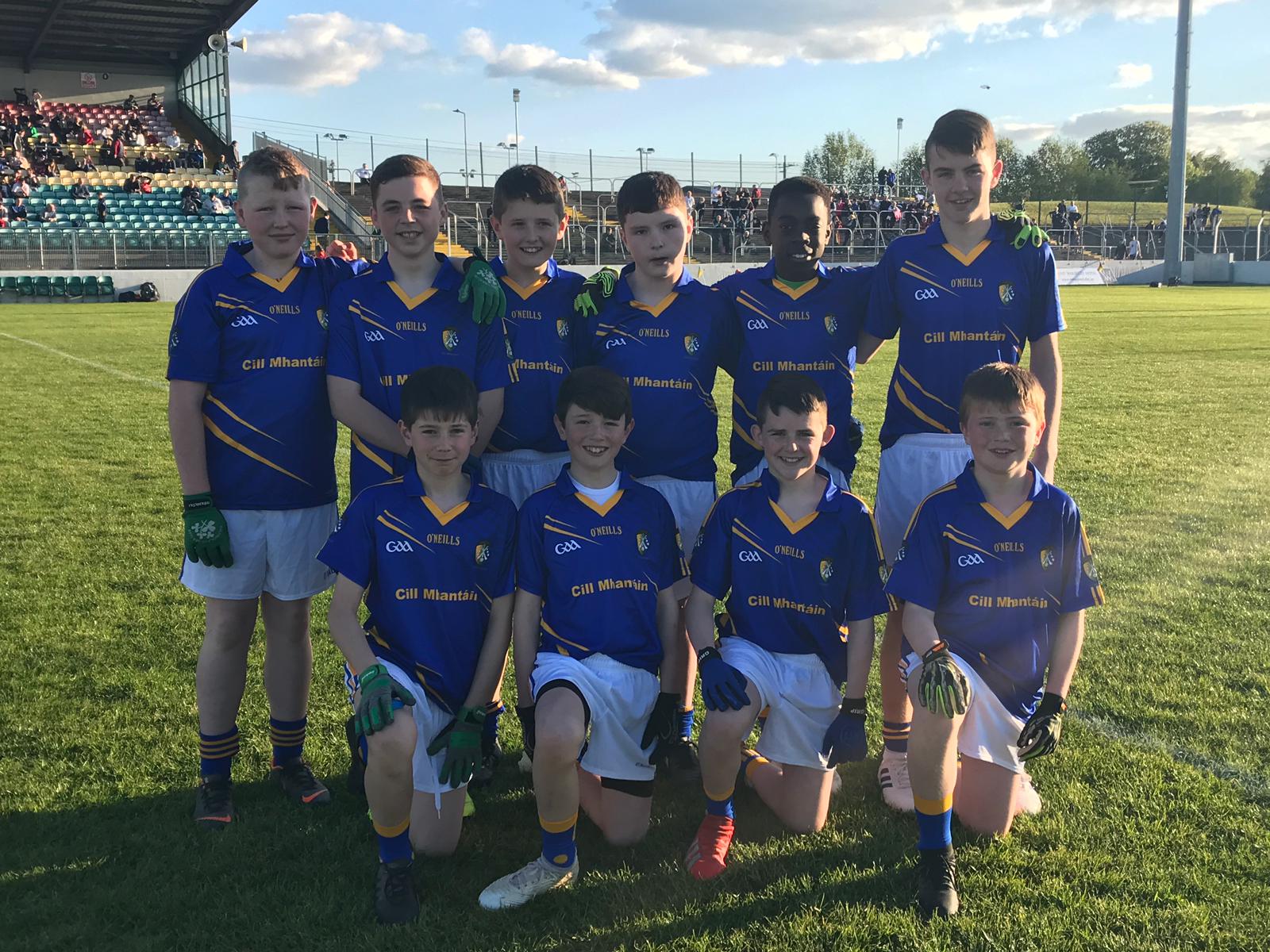 We were really excited to be asked to play at half time during the Wicklow vs Kildare Leinster Championship match which took place in Dr Cullen Park, Carlow on Saturday May 11 at 7 p.m.  Five students from our school, Scoil Nioclais Naofa Dunlavin, and five from Scoil Naomh Iosaf Baltinglass were chosen to represent Wicklow. We met underneath the scoreboard at the pitch a few minutes before half time. Teachers, Sinead Keogh and Ciaran Walsh, organised us into positions just before we ran on to the pitch. It was a great feeling. We played very well and beat Kildare in our mini game. Unfortunately the senior team didn’t follow our example.

Carnew come out on top at Final Camogie Blitz

In Roinn 1 we had teams from Scoil Chualann, Sacred Heart NS, Carnew NS, Our Lady’s Rathdrum, Gaelscoil Uí Chéadaigh and Bearna Clé NS. The winners of this division would win Sciath Uí Choitir as well as the honour of representing Wicklow at a Leinster Blitz being held in Laois on the 11th of June. Many congrats to our winners Carnew National School who will go on to represent us in Leinster and to runners up Sacred Heart NS.

Kilcoole are the Champions of the Credit Union Cup!

Due to inclement weather, the original fixture for the Credit Union Cup was postponed and re-fixed. 8 teams took part in the blitz; St Pats 1 & 2, St Cronans, Scoil Chualann, Gaelscoil Uí Chéadaigh, Kilcoole PS, Newtownmountkennedy PS and Glenealy. The teams were divided into two groups to play against each other. After 3 rounds of competitive hurling, Glenealy, St Cronans, St Pats 1 and Kilcoole qualified for the Credit Union Cup Divsion 1 semi finals. Kilcoole defeated St Cronans while Glenealy beat St Pats to qualify for the Divsion 1 decider. After a keenly contested final that was full of silky hurling skills and fantastic scores, Kilcoole came out victorious on a scoreline of 1-6 to 1-4. Kilcoole will now represent Wicklow in a Lift & Strike hurling blitz in Carlow against teams from all over Leinster.

Scoil Chualann and Gaelscoil Uí Chéadaigh contested an all-Bray Division 2 final with Gaelscoil Uí Chéadaigh coming out on top in that battle. In the Division 3 decider St Pats 2 beat a young and improving Newtownmountkennedy team. Many thanks to Philip Campion, Johnny Tallon and Eoin Doyle for their help in hosting and co-ordinating this fantastic day of hurling. Well done to all the schools involved!

Wednesday, the 29th May saw the last Allianz Cumann na mBunscol Ladies blitz of the year at Emmet Park in Bray. The rain that threatened held off but there was a deluge of good football on show from the 3rd and 4th class girls. In all there were 9 teams present from 8 schools in North East Wicklow. All agreed it was a hugely successful and fun day out.

Lift and Strike in Carlow

On Thursday 13th June Wicklow were represented by Kilcoole Primary School at a Lift and Strike tournament in Èire Óg GAA Club, Carlow.  After a re-shuffle of the groups (due to some teams unable to attend), the Wicklow boys played the following 3 games: Carlow (a), Carlow (b) and Offaly. Unfortunately they came away without a victory, but had a close final battle with a very strong Offaly team. The boys found the new “Lift and Strike” rules a challenge at first but got into the games as the day went on. They played with fantastic spirit and had some terrific individual performances. The rain did little to dampen their spirits.  The boys that attended from Kilcoole Primary School were: Lochlainn Hughes, Finian Hughes, Darragh Shannon,

This year’s Allianz Cumann na mBunscol Sports Day has now been re-scheduled  for Wednesday 19th June in Charlesland Sport and Recreation Park, Greystones at 10 a.m. sharp.  All schools have been emailed guidelines in relation to Sports Day and we are looking forward to a great day.