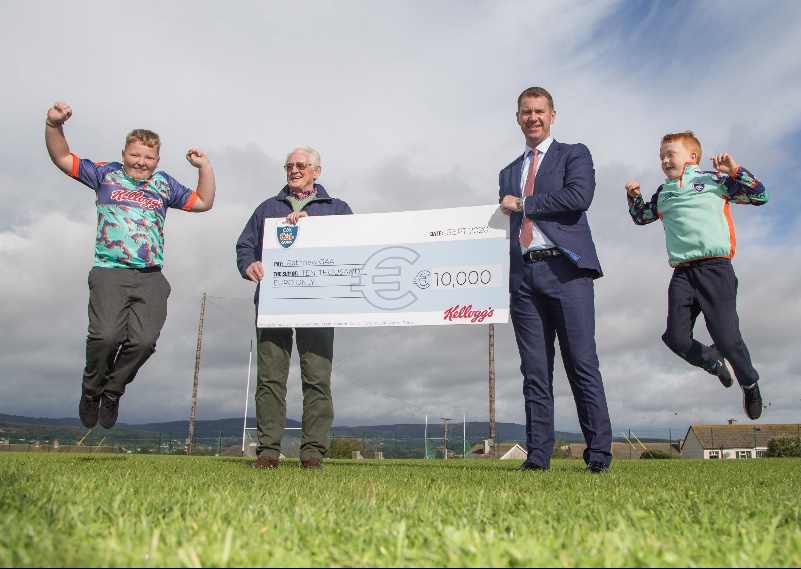 Rathnew GAA has been boosted with fantastic news that it has won €10,000 as part of the 2020 Kellogg’s GAA Cúl Camps on-pack promotion. Kellogg, now in its ninth year sponsoring the Kellogg’s GAA Cúl Camps, held the nationwide on-pack promotion for all GAA clubs during the summer. Meath’s Skryne GFA and Newmarket on Fergus GAA club, Clare were the other winners in the competition.

The winning clubs were chosen by draw to culminate the summer-long promotion in conjunction with the Kellogg’s GAA Cúl Camps. During a year where fundraising has been restricted and funds limited, the overall prize fund of €40,000 will provide the winning clubs with very welcome support when looking to invest in the club.

After an uncertain start to the summer, 71,699 children attended Kellogg’s GAA Cúl Camps at 667 camps throughout the country. With participation levels understandably lower this year due to limited availability, the camps proved a real success giving children across the country a chance to socialise and exercise outside. A Cúl Camps first was also started, TG4 aired the GAA Cúl Camp television programme with over 300,000 viewers tuning in. The television show provided a new innovative way for children across the country to get involved in this year’s Kellogg’s GAA Cúl Camps through a mix of drills, skills, games, nutrition and wellness.

Ruth Hughes from Kellogg said, “Our partnership with the GAA is very much focused on the grass roots of the association and this year we were very happy to commit our largest ever prize fund of €40,000. We had thousands of entries and we would like to thank everyone who took to time to enter for their club. On behalf of Kellogg, I would like to congratulate Rathnew GAA. This will be a huge boost to them in such a tough year but we are delighted to know that these funds will go back into the local communities and clubs, the heart of the GAA.”

Commenting on winning the prize, Peadar Duigeannain, Secretary, Rathnew GAA said “On behalf of Rathnew GAA club I want to express our delight at winning €10,000 and want to thank Kellogg for this and its successful competition. The Kellogg’s GAA Cúl Camps were a particular success this year and a well-timed diversion from everything going on. The Kellogg’s GAA Cúl Camps idea is a fabulous example of how the GAA operates with older GAA players training up younger kids from different clubs and thus making the GAA a community stronger. The work that Kellogg does in making this possible cannot be quantified.

This money is well needed and will go a really long way for our club, in particular our juvenile section. As a club on the commuter belt, our little village has expanded and so has our juvenile membership.

We run teams in all grades from Nursery to Adult for both Ladies and Gentlemen and this injection of money will provide them all with up to date equipment and for this, we can’t thank Kellogg enough.”